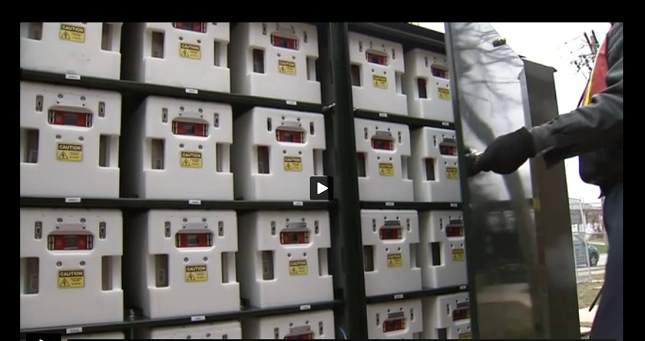 From the University of Toronto media release:

Toronto’s electrical system is a little smarter now, thanks in part to a University of Toronto team led by Professor Reza Iravani of Electrical & Computer Engineering.

Toronto Hydro has installed a 250-kW, 48-module battery storage unit at a North York community centre that is strong enough to power a small street for one hour. But what makes the unit unique, says Iravani, is that it is connected to the Toronto Hydro power grid, and can store energy during off-peak times to later release it back into the grid as needed.

The project was developed by a consortium comprising Toronto Hydro, Markham-based eCAMION, Korean battery manufacturer Dow-Kokam and U of T. Iravani and his team developed and implemented the algorithms that integrate the battery system through a power electronic converter in the Toronto Hydro grid.

“This is not just an academic research project,” said Iravani, the coordinator of U of T’s Centre for Applied Power Electronics. “We had to deliver a functioning system with the high degree of reliability that Toronto Hydro requires.”

“We’re providing the brain for the operation of this battery system to appropriately integrate it into Toronto Hydro’s distribution grid.”