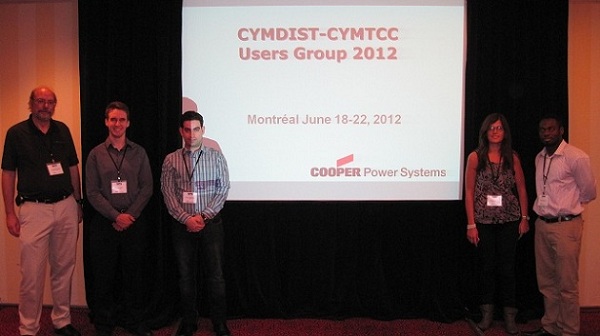 In mid-June, several NSMG-Net students attended the CYMDIST-CYMTCC Users Group 2012 Conference in Montreal, Quebec.  The students were very grateful to Daniel Desrosiers and the CYME team for allowing them to participate in this user conference, where new features were presented and industrial users were able to present and interact with the creators of the software.

The new features – including Volt/VAR optimization, low voltage modeling, Python scripting, and scenario manager – can help the NSMG-Net researchers with their future work.  This was a great experience as the students were able to meet and network with industrial personnel from around the world.  This conference enabled students to better understand issues faced by the industry today, and how CYME can help solve such problems.  This invaluable knowledge can help guide the students to bridge the gap between their research and applicable industrial problems, which is a great benefit and goal of the NSERC Smart Microgrid Network.